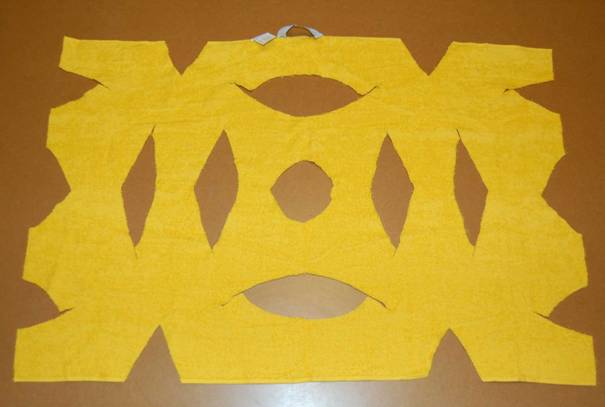 In espionage parlance, a cutout is a mutually trusted intermediary or channel of communication which facilitates the exchange of information between agents. A symbol of non-function, a cut-out also refers to an item that for some reason has been deeply-discounted, remaindered or taken out of stock. The towel carries some conflicting symbolism. I.e. throwing in the towel is conceding defeat, but waved by fans to cheer on their favourite sports-team a towel represents success. In The Hitchhiker's Guide to the Galaxy, towels are described as the most "massively useful thing an interstellar hitchhiker can have.". From common use the towel remains associated to the body. The action of cutting into otherwise useful household fabric such as towels can be associated to self-injury and is in some cases a sign of neurosis. On the other hand, a cut-out sheet of paper or cloth might be seen as one of the simplest ways of objectifying ornament. In our case, as the initial function is obstructed, the towel is free from obligation and might be seen as an object in its own right, going from ordinary towel to becoming a "show towel”.